Meanwhile, the favorites lead in both groups, while Triumph and Extra Salt were MIA due to DreamHack Open January.

The first week of matches in ESEA Premier Season 36 have come to an end, predictably seeing the favored sides emerge ahead in their respective match-ups.

It was a week where Extra Salt and Triumph were both notably absent due to their attendance in DreamHack Open January, although Rebirth took part in both events and ended up making the deepest run in the $30,000 tournament with a second place finish, falling to paiN in the grand final.

Bad News Bears kicked off their Premier campaign with a one-sided victory over Watch This, led by strong showings from Michael "Swisher" Schmid and Gabe "Spongey" Greiner. High Coast made similarly short work of Levitate in their own debut match-up, dominating 13-2 on their Inferno attack and 12-3 on the CT-side of Nuke for a quick victory against Nicholas "hate" Young and company.

Rebirth continued the trend of dominant wins as Big Chillin were dispatched of in fast fashion, Zach "XotiC" Elshani being the difference-maker for his side by averaging 119 damage per round over the two maps (16-9 Inferno, 16-5 Mirage), posting a 1.75 rating at the end of the series. Meanwhile, Rise got off to a strong start in the season thanks to a stellar showing from Dylan "Saturn" Finch, claiming a 2-0 win over SKDC to end the first day of matches.

Wednesday's results also went mostly as expected as Recon 5 took down ImPerium in a two-map series, while Secret Club dealt Levitate their second loss by claiming 16-6 wins on Train and Mirage. SKDC were also left with an 0-2 record after Depth scored wins on Train and Nuke, while fellow Advanced-promotees GGPR also lost out in their first match, falling to Oceanus.

In the sole series to go three maps in the first week of play, Mythic were able to make a strong debut with their new roster, reverse-sweeping Eclipse with Overpass and Train victories. Eric "adreN" Hoag and Erik "fl0m" Flom led the scoreboard for their side, while Felix-Antoine "daf" D'Avignon had a rough start in his first recorded match on HLTV. 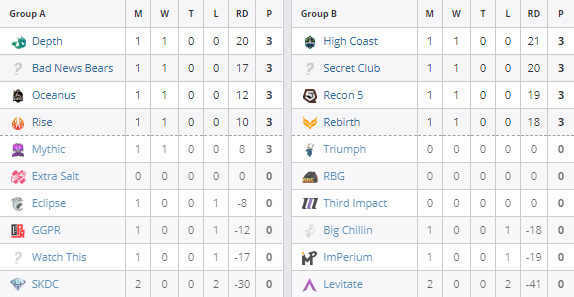 The second week of ESEA Premier Season 36 will also see the kick off of the Premier broadcast on Twitch, with matches all taking place at 9 PM EST.