The former "not" coach of Depth is playing for an Open team on an alternate account while banned from ESEA.

Jake "eptima" Allen is allegedly avoiding his malicious activity ban on ESEA by playing on an alternate account in ESEA Open, sources tell Dust2.us. eptima's ban dates back to April 2020, when he was suspended from the platform after he "impersonated other players on the Rank G TeamSpeak and used racial slurs and trolled while the players were in game," according to ESEA community manager Jackson "el_jack0" Wolf.

Sources close to the Open team in question, Suck Dick Cook Food, allege that "nowhere" is eptima on an alternate account, and "drooling-noob" is former SKDC member David "sensu" Oliver. The same sources say that the team's captain, "TheSurgeon", offered to pay one or both of the players for their help in winning league matches, an allegation that has credence given the user's post on the ESEA forums on February 5th.

According to Spencer "Pugg" Moore, this screenshot was provided to members of the team who asked who the new addition was, with the league history coinciding with what is visible on eptima's ESEA profile. While not proof on its own, there are additional conversation logs prior to the match, where one of the players states to a friend that they would not be playing in the match as they had been replaced by a Premier player.

When asked if it was Wyatt "snav" Phillippi, the player states that it was not him, but one of his "old teammates." He then reveals that TheSurgeon streamed the match on Twitch, which has been recorded and stored in its entirety due to the VOD being set to subscribers only.

Additionally, nowhere's ESEA account was created on February 7th, with his sole forum post comment being in response to the Counter Nature interview with the former Depth members in which he states, "they right". Although it cannot be definitively proven to be eptima's, a Twitter account for nowhere also exists, whose first like is on a tweet defending eptima telling another player in a VALORANT match to "kill themselves." The account also follows the same cohort of players involved with timbermen and the former Depth roster.

Pugg also created a video comparing eptima's voice from prior ESEA matches to nowhere's voice from the league match which can be found below - also note that the accounts shared the exact same crosshair.

Early on Wednesday, following the aftermath of the Counter Nature interview and the Depth player bans, TheSurgeon also tweeted the following: 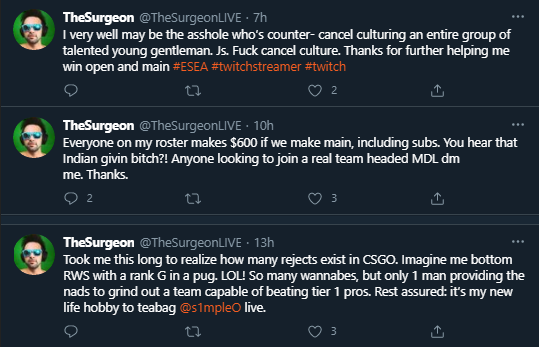 A cached copy of the above, and the two preceding tweets, can be found here. Dust2.us knows the information contained in this article has also been forwarded to ESEA, who will conduct their own investigation.