PwnAlone and company made short work of RBG

New England Whalers and Secret Club have claimed spots in the grand finals of the second ESEA Autumn Cash Cup, seeing to the elimination of RBG and Rebirth, respectively.

Ben "ben1337" Smith's troops made short work of RBG in a two-map series, dealing the majority-Canadian side a loss with dominant scorelines on Inferno and Overpass. 10-5 halftime leads on both maps gave way to a swift finish for the Whalers as Brendan "Bwills" WIlliams led the charge with a 1.84 series rating to help his side claim victory. 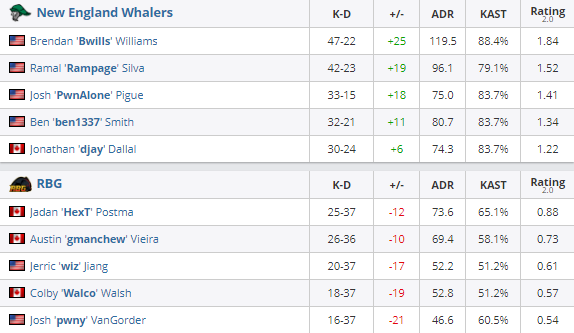 The series between Secret Club and Rebirth kicked off in decidedly different fashion, with Rebirth dominating the CT-side of Overpass with a 14-1 lead. A pistol win quickly put the team on match point, but Secret Club rallied back with ten rounds in a row before their comeback effort was finally put to a halt by Rebirth, who took the map 16-11.

The teams remained neck-and-neck as Rebirth's pick of Dust2 got underway, with Kevin "4pack" Przypasniak's side edging out a one-round lead at halftime. A pistol victory and subsequent round wins saw Rebirth move up to an 11-7 lead before Secret Club were able to respond, and respond they did as they only conceded one additional round en route to a 16-12 map win to even the series score.

Train flipped the script as it was Secret Club who showed strong form, posting a 12-3 lead at the end of their offensive effort. Rebirth were able to mount their own comeback effort in the second half, fighting back to a 13-11 scoreline, but Secret Club stabilized to win three final rounds and edge out the series win with a 16-11 victory. 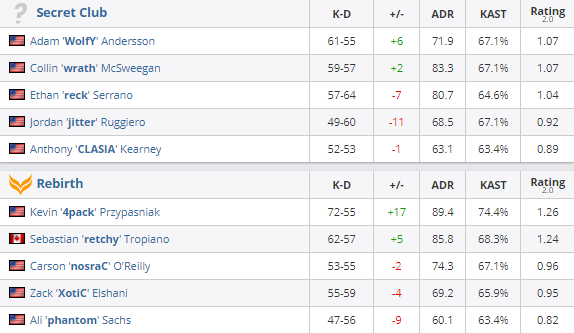 New England Whalers and Secret Club are set to face off on an as yet to be determined date to decide which team will claim the lion's share of the $4,000 prize pool.