The teams bound for playoffs are becoming more clear following the conclusion of the seventh week of ESEA Premier Season 36, with Mythic notably assuring themselves of a top eight spot following a win over SKDC on March 9th.

With the BLAST qualifiers and DreamHack Open March taking place last week, a number of matches were postponed or rescheduled, and played out on varying days compared to the regular Premier schedule. After failing to take down Extra Salt in the DreamHack Masters Spring closed qualifier, Bad News Bears were able to claim revenge, besting Josh "oSee" Ohm's side in their Premier match-up to end their regular season with a flawless 8-0 record.

Levitate also notched their first win of the season over ImPerium, leaving the latter squad with no wins to their name and likely facing auto-relegation to Advanced, with just one match remaining against The Commission to decide their fate. Meanwhile, Rise were able to take down Eclipse, leaving them in a tight race for the final playoff spot from Group A alongside Oceanus and GGPR.

Some of last week's matches were moved to Sunday and Monday as a result of the aforementioned event overlap, with the most notable pair seeing Triumph pick up wins over RBG and ImPerium to keep themselves in playoff contention. Third Impact also succeeded in taking a map off of High Coast despite losing the series 1-2, while Extra Salt dispatched of GGPR in fast fashion.

In one of the longest-lasting two-map series in Premier history, Recon 5 locked horns with Levitate, where the second map, Mirage, took numerous overtimes before Tyler "tweiss" Weiss and company were able to edge out a win, 40-36, thanks to a stellar performance from Koby "kobruh" Higgs, who ended the map averaging 103 damage per round and a 71-50 K-D.

Some notable matches to keep an eye on for the final week include:

The standings prior to matches on March 16th looked as follows: 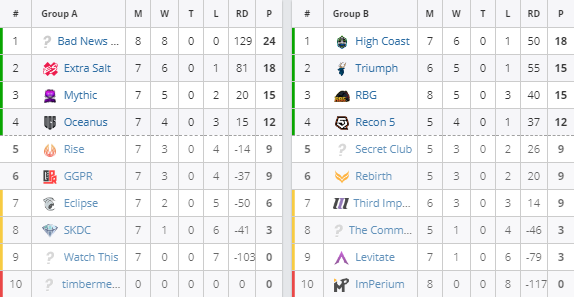