The first day of ESEA Spring Cash Cup 3 has concluded, seeing Bad News Bears and Recon 5 advance through the open entry portion of the bracket to meet the invited sides of High Coast and Triumph in the best-of-three semifinal stage. A nominal total of fifty teams signed up to compete in this week's Cash Cup, with just four Premier sides among the reduced pool. One of those teams, Rise, were sent packing early on in surprising fashion after falling 13-16 on Dust2 to Dino Nuggies, who in turn had their run ended in their subsequent match-up by Third Impact to set up a match against Bad News Bears in the qualifying round.

Peter "ptr" Gurney's troops had gone through the bracket relatively unscathed, with only Green Tea Party offering them some contention in a 16-11 affair on Inferno. Bad News Bears' match against Third Impact was no different as ptr led his side to a 10-5 lead on Nuke, with the team wasting little time in closing out the map in the second half. 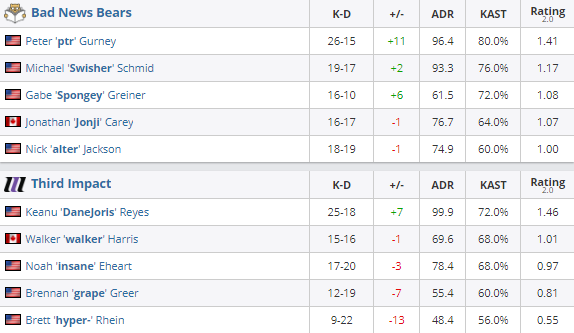 In the bottom half of the bracket, No. 2 seed paiN were shockingly felled in their third matchup by Advanced playoff side Villainous, who mustered a 13-2 lead on the T-side of Inferno before eventually closing things out in the second half, 16-13. Villainous, much like Dino Nuggies, were unable to secure a second upset victory in their ensuing match against Recon 5, who were using Jeff "RZU" Ngo in place of Austin "AAustiN" Urb. The Premier squad put up a solid offense on Nuke, posting ten rounds by the break, and in identical fashion to Bad News Bears were able to put the map to bed shortly into the second half. 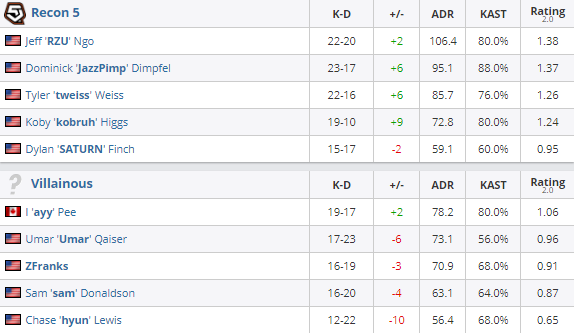 The semifinals of ESEA Spring Cash Cup 3 are:

Both best-of-three series will kick off at 4PM EDT.