The fourth week of ESEA Premier Season 36 has wrapped, notably seeing Triumph make their first appearance in the league and Rebirth falling in a surprising series to RBG.

Rebirth were not the only team to fall to RBG in week four, with Colby "Walco" Walsh and company securing their second win of the season at the start of the week over Levitate. That series kicked off with RBG utilizing their coach, Troy "ara" Pollock, for the first half of Nuke, managing a 7-8 scoreline at the break before Jerric "wiz" Jiang returned, helping his team edge out a 16-13 win before dismantling Levitate on Inferno, 16-6.

On Wednesday, RBG took the aforementioned win over Rebirth, putting up a strong defense on Overpass for a 16-9 map win. Rebirth answered back with a heavy-hitting attack on Mirage, taking the map 16-10, but RBG came out the better side of the Inferno decider, securing a 16-12 victory despite a strong showing from Collin "wrath" McSweegan on the opposing side (31-18 K-D, 104 ADR, 1.45 rating).

Meanwhile, Triumph made their debut in ESEA Premier in a highlight match-up against High Coast, dealing Ben "ben1337" Smith's side their first loss in the league. The trio of Danny "cxzi" Strzelczyk, Brendan "Bwills" Williams, and Austin "Cooper" Abadir combined to guide Triumph to a dominant 16-5 win on Nuke, but it was Cooper who was the pivotal player on High Coast's pick of Overpass, helping edge out a 19-15 overtime victory with a 34-24 K-D and 1.33 rating.

The stream team of Mythic added a third win to their tally as they took down Rise in a three-map series, falling in close fashion on Inferno before reverse-sweeping the series by securing Train and Dust2, with the latter map going into double overtime. Another reverse-sweep saw Levitate dealt their second loss of the week as they were felled by Third Impact, while GGPR bested Watch This 2-0.

This week also saw Rise handed a forfeit win by Oceanus, who failed to have five players ready to play the match as Wayne "castro" Einarsson. The team attempted to skirt the rules by adding Brandon "YuZ" Cyr after the server was already assigned, a move which is against ESEA's rules. ImPerium put up a good fight against Secret Club, conceding a 12-16 loss on Inferno before edging out a 19-17 win on Mirage, forcing a Nuke decider. There, Adam "WolfY" Andersson's side proved superior, posting an 11-4 lead on the CT-side before closing things out a little after the side swap, taking the map 16-10.

Some notable matches for this upcoming week are:

The standings at the conclusion of week four look as follows: 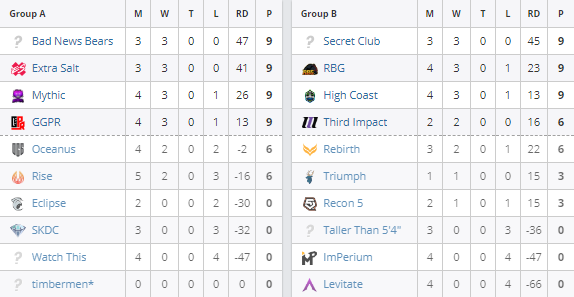