News Matches Results Community Top 10 Calendar
SKDC, Kinship secure final ESEA MDL Season 36 spots from relegation
Kinship were the only team to retain their spot in the league for Season 36. Odeag makes his return to MDL after seven seasons

Kyle "OCEAN" O'Brien has made his return to MDL, besting ex-Recon 5 2-0 in the lower bracket semifinal of ESEA MDL Season 35 Relegation to qualify. Simultaneously, Kinship narrowly prevailed in their lower bracket matchup against Rise, retaining their MDL spot heading into the next season.

ALSO READ
GGPR and GSG9 to MDL over SKDC and Rise

SKDC were the first to secure their berth as they took down ex-Recon 5 in a two-map series. A 10-5 T-side effort on Mirage, helmed by a strong showing from Dylan "Hiki" O'Kane, gave SKDC the edge on their own map pick, a lead which they quickly converted into a victory in the second half as they conceded just two additional rounds en route to a map win. Kory "SEMPHIS" Friesen was the front-runner for SKDC with 22 frags, while Dominick "JazzPimp" Dimpfel led the way for ex-Recon 5 with 14 kills.

Dust2 was a closer affair as SKDC opened with a two-round lead, but found themselves put on the back foot as ex-Recon 5 won seven in a row on the defense thanks to the efforts of Jacob "FugLy" Medina. OCEAN and company were able to recover at the end of the half as they took six of their own in response, edging out an 8-7 scoreline at the break.

The two teams remained neck-and-neck at the onset of the second half, and at one point it seemed as if ex-Recon 5 would push the series to a decider when they held a 14-13 lead; however, SKDC remained resilient as they won three in a row to steal away the victory, closing the series 2-0 to book their ticket to MDL for Season 36. 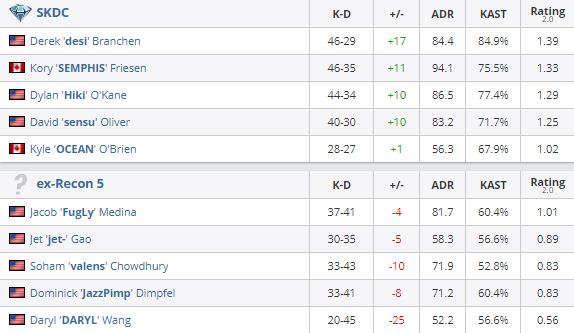 Kinship were the final team to secure their spot as claimed a hard-fought victory over Rise, sneaking through wins on Overpass and Nuke. A 9-6 lead at the end of Kinship's CT-side effort quickly gave way as Cody "Domorin" Lutzel helped keep Rise in the running, battling back into overtime in the second half. There, Kinship proved the better side, taking the map 19-17 despite a heroic 34-22 K-D and 1.49 rating from Domorin.

It seemed as if Kinship would run away with the series as they opened Nuke with a flawless streak of seven rounds, but Rise managed to lock down their defenses for the latter stage of the first half, fighting back to post seven rounds of their own by the break thanks to stellar form from Aidan "Aidan" Higgason, who ended the first half averaging 145 damage per round and boasting a 19-8 K-D.

A pistol round win allowed Rise to immediately tie up the scoreline, but a force-buy from Kinship flipped the script as it was they who took control, pushing up to an 11-8 lead. Rise fought back to tie the score once again, but came out on the losing end of a battle at the end of the map, with the result seeing Kinship narrowly edge out a 16-14 win. 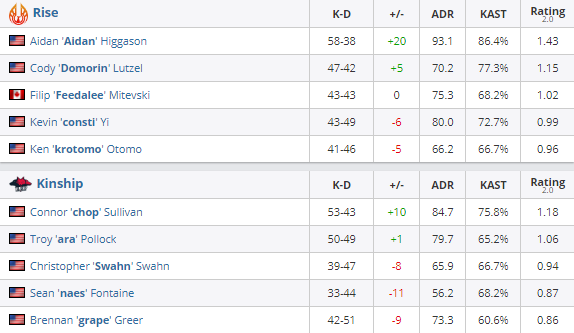 With ESEA MDL Season 36 getting underway on January 18th, the team list for the season may shift due to rosters disbanding, or players accepting offers to play on other teams. Keep an eye out on Dust2.us for coverage of roster changes as they unfold.