News Matches Results Community Top 10 Calendar
RBG to trial viz in fourth ESEA Autumn Cash Cup
The former Incognito player will fill the shoes of pwny, who left RBG at the end of the MDL season.

RBG will enlist the services of Wesley "viz" Harris in their fourth ESEA Autumn Cash Cup campaign, Dust2.us has confirmed. The player was added to the team's event roster earlier this week, taking the place of Josh "pwny" VanGorder, who departed for VALORANT following the end of ESEA MDL Season 35.

viz will slot in well for pwny as he averaged a 1.16 rating as a part of Incognito in his debut MDL season, and has demonstrated solid form in previous matches as he helped Third Impact qualify for the MDL through Advanced with a 1.23 playoff rating. pwny, meanwhile, was RBG's hardest-hitter as he also averaged a 1.16 rating in MDL, although his average rating in the past three months took a hit against higher caliber opposition in IEM New York.

The player swap marks the first change to RBG's roster in 15 months, with the team being applauded for being one of the few rosters in North America to not undergo frequent changes. In that time, the team earned promotion from ESEA Advanced to MDL, making playoffs in their debut season. However, they were eliminated in 7-8th place following losses to oNe and Depth, and will now look to improve upon those results with the trial of viz. 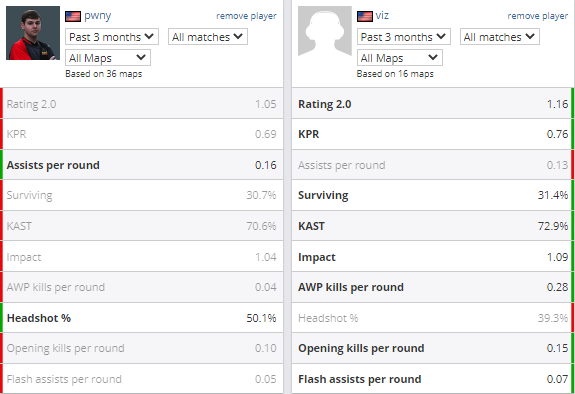 Registration for the next ESEA Cash Cup will remain open until 1:55 PM EST on Saturday, with interested teams able to signup on ESEA's website.