News Matches Results Community Top 10 Calendar
New England Whalers ease past Secret Club to set up rematch against oNe in MDL Season 35 grand final
The two MDL frontrunners will face off for a spot in ESL Pro League Season 13 and the title of MDL Season 35 champions.

New England Whalers have advanced to the grand finals of ESEA MDL Season 35, soundly defeating Secret Club in a two-map series in the consolidation final to set up a rematch against oNe for a spot in ESL Pro League Season 13.

ALSO READ
ESEA MDL Season 35 playoffs down to top three seeds; Whalers or Secret Club will face oNe in finals

The Whalers kicked off the series on the CT-side of Secret Club's Overpass pick, making up for a pistol round loss with a force-buy to swing momentum in their favor and go up 6-1. A Deagle triple kill from Ethan "reck" Serrano helped Secret Club break through as the team got themselves back into the game, but New England Whalers pieced together their defenses towards the end of the half to pull ahead 9-6 as they swapped to the attacking side.

There, Josh "PwnAlone" Pigue and company continued to run rampant, swiftly attaining match point with six rounds in a row before closing out the map 16-8 shortly afterwards, moving the series on to their own pick of Dust2.

Another strong start saw the Whalers up 6-0 on Dust2 before Secret Club began a comeback effort, this time kicked off by a Deagle triple from Adam "WolfY" Andersson. The economic swing allowed Secret Club to narrow the gap to 6-5, but once again PwnAlone's side stabilized towards the latter portion of the half to retain their lead and go up 10-5 at the break.

A pistol win for Secret Club helped the team get back in the running as they went on to secure a victory against the Whalers' ensuing force-buy and eco round, putting the scoreline at 10-8. However, a bombsite retake in the first gun round quickly put the ball back in the court of the Whalers, who wasted little time in bringing the match to an end as they only conceded one additional round en route to a 16-9 map win. 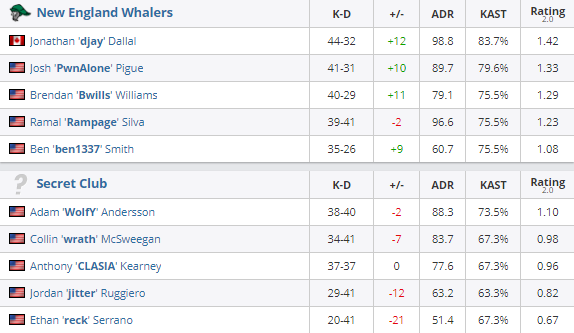 The New England Whalers will take on oNe in the best-of-five grand finals of ESEA MDL Season 35, where the Brazilian roster will enter with a one-map advantage due to their flawless run through the upper bracket. The winner will claim the lion's share of the $30,000 prize pool as well as earn a spot in ESL Pro League Season 13.