The first day of playoffs for ESEA MDL Season 35 has come to an end, most notably seeing Russian Canadians forfeit their playoff run due to the no-show of Ian "battery" Yates and Alex "vek" Voynov.

It was a dismal end to the season for Dylan "Saturn" Finch's side, who had narrowly secured the eighth seed to eke into playoffs contention. The sudden departure of Wayne "castro" Einarsson towards the end of the regular season had forced the team to utilize Austin "AAustiN" Urb as a stand-in, with the 22-year-old rescheduling and working around his collegiate matches to help the team in their final matches and in their playoffs run.

Despite having AAustiN's help, Saturn and David "J0LZ" Jolin were left hanging when they showed up to play against the New England Whalers as neither vek nor battery turned up, leading to a lengthy TwitLonger from Saturn explaining the situation from his perspective. In the TwitLonger, Saturn revealed that he had to offer to pay vek to play the final matches of the season, and that vek had subsequently agreed to play in the playoff matches.

When contacted by Dust2.us, vek alleged that he had informed AAustiN that he would not play the match four hours beforehand. Regardless, the end result was the same as with two players being missing, Russian Canadians were forced to forfeit against the Whalers, and will also subsequently forfeit their lower bracket match against Rebirth tomorrow due to the same reason.

In the midst of the drama, three best-of-threes did play out, with oNe being the first  to claim victory as they eased past RBG in a two-map series. The Brazilians kicked things off on RBG's pick of Inferno, trailing by a single round at the break before picking up the pace on the attacking side, giving up just two rounds en route to a 16-10 finish. Nuke unfolded in similar fashion as oNe narrowly pulled ahead at halftime before putting up a stalwart defense, winning eight in a row to close the series with a dominant 16-7 win. 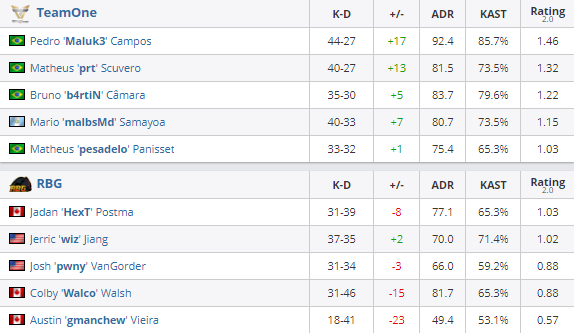 Depth suffered a similar fate in their match against Secret Club, being forced to field Jake "bddu" Gartin as a last-minute replacement for Bryan "HavoK" Kuzawinski, who stepped down from the team earlier in the day due to unfortunate personal circumstances.

The series predictably did not go the way of Depth as they were blown out by Secret Club, with Jordan "jitter" Ruggiero leading the way for his side in 16-6 and 16-5 victories on Train and Overpass to close out the series in swift fashion. 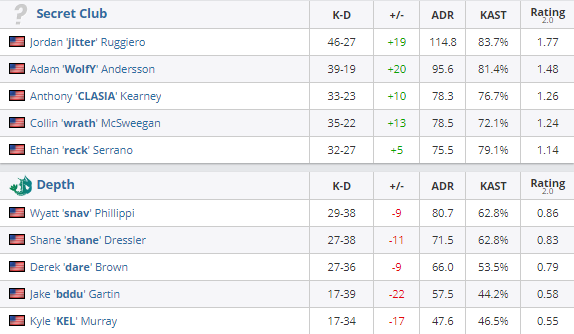 The last series to conclude was between the stream team of Mythic and Rebirth, with Erik "fl0m" Flom's side coming out the victors after two maps. A 10-5 lead at halftime on Train gave way to a 16-10 scoreline to close out the map for Mythic, whereas Vertigo saw a little more contention as Rebirth had six by the break before a pistol round victory gave them the chance to close the gap. However, Mythic answered back with a force-buy and remained ahead for the rest of the map, with Adam "Polen" Polen closing out the series with a 1vs2 clutch to take the map 16-12 for his side. 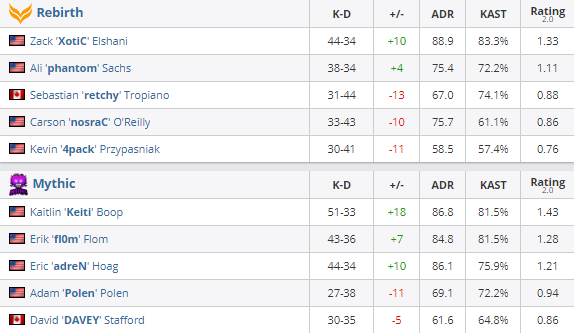 The second day of play will see New England Whalers face off against Mythic and Secret Club take on oNe in the upper bracket, while Depth and RBG will fight for their tournament lives in the lower bracket. All matches will kick off at 8 PM EST.